Showing posts with the label REET
Show all

A beautiful portrait of life-cycle presented by : William Shakespeare in his Poem "The Seven Ages Of Man". 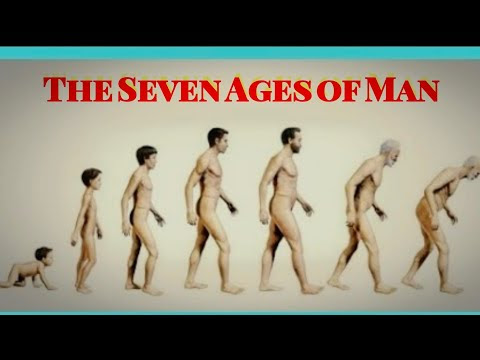 Written by:  William Shakespeare in one of his play entitled “ As You Like It ” Shakespeare wrote his poem in the form of a monologue. Jacques’, one of the characters of this play speaks these lines in Act –II, scene - VII Enjoy in audio Poem  All the world's a stage, And all the men and women merely players, They have their exits and entrances, And one man in his time plays many parts, His acts being seven ages. At first the infant, Mewling and puking in the nurse's arms. Then, the whining schoolboy with his satchel And shining morning face, creeping like snail Unwillingly to school. And then the lover, Sighing like furnace, with a woeful ballad Made to his mistress' eyebrow. Then a soldier, Full of strange oaths, and bearded like the pard, Jealous in honour, sudden, and quick in quarrel, Seeking the bubble reputation Even in the cannon's mouth. And then the justice In fair round belly, with good capon lin'd, With eyes severe, and
Post a Comment
Read now »

Using Present Continuous Tense was never so easy before.

- February 15, 2021
How and where do use the Present Continuous tense? Format(s) Assertive Subject + is/am/are + Main Verb 1st + Ing Negative Subject + is/am/are + Not + Main Verb 1st + Ing Interrogative Is/am/are + Subject +Main Verb 1st +Ing?   Agreement Singular Subject + Singular Verb Plural Subject + Plural Verb   To tell about an action or process that is going on at the time of speaking. They are cutting trees. (Cut + ing) (T) is doubled here.   To tell about the actions, which are going to be, happen in near future. He is practicing. (Practice + Ing ) ‘E’ is removed here.  Am I doing wrong?   With ‘always’, ‘continually’, ’constantly’, and ‘forever’, when a doer is doing something against others' will. She is always complaining.   Where do not use continuous tense? Stative Verb/ Non-conclusive verbs   Verbs of appearance               Look, Resemble, Seem, Appear Verbs of emotions                   Want, D
Post a Comment
Read now »

- February 10, 2021
The Good-Morrow BY JOHN DONNE Stanza - I I wonder, by my troth, what thou and I Did, till we loved? Were we not weaned till then? But sucked on country pleasures, childishly? Or snorted we in the Seven Sleepers’ den? ’Twas so; but this, all pleasures fancies be. If ever any beauty I did see, Which I desired, and got, ’twas but a dream of thee.   Lines start with first person pronoun, here poet expresses his surprise as to what he and his counterpart did earlier they fell in love. He regards their former pleasures as childish and rustic and their former life as a long sleep in which they were as oblivious to reality of life to expresses this he has used a reference to the Bible of Seven Sleepers who took refuse in a den due to fear of persecution. He thinks that their earlier lives were abstract and there was nothing real. Poet says his past love for old lovers was just a mere reflection of his present beloved.     Troth                                              Truly
Post a Comment
Location: Aristotle Coaching Classes Shop -1, Row, 1, Sector - 3, Mahaveer Nagar Extension, Talwandi, Kota, Rajasthan 324009, India
Read now »

- February 05, 2021
John Donne Brief Bios Life Poet was born in London, in 1572 in a Welshman’s family. By religion, he was a catholic. He studied law at Lincoln’s Inn. He often visited women of notoriety and in this way acquired that experience which makes him such a great love poet. He worked under Lord Edgerton as his secretary with whose niece, Anne More, he eloped and married her. Died on 1631, 31st March at the Deanery. In 1633, his First edition of Collected Poems published. Major Works   The Canonization   The Extasie   The Anniversary   The Flea   The Good Morrow The Sunne Rising
Post a Comment
Read now »

The Extasie - What poet feels while making love.

- February 04, 2021
Poem A pregnant bank swell'd up to rest The violet's reclining head, Sat we two, one another's best. Our hands were firmly cemented With a fast balm, which thence did spring; Our eye-beams twisted, and did thread Our eyes upon one double string; So to'intergraft our hands, as yet Was all the means to make us one, And pictures in our eyes to get Was all our propagation. As 'twixt two equal armies fate Suspends uncertain victory, Our souls (which to advance their state Were gone out) hung 'twixt her and me. And whilst our souls negotiate there, We like sepulchral statues lay; All day, the same our postures were, And we said nothing, all the day. If any, so by love refin'd That he soul's language understood, And by good love were grown all mind, Within convenient distance stood, He (though he knew not which soul spake, Because both meant, both spake the same) Might thence a new concoction take And part far purer than he came. This ecstasy doth unperplex, We
Post a Comment
Read now »